I strongly support the theory that the shadow phenotype has been inherited from tiger shrimp. 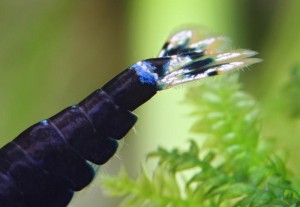 In this article (deutsch) I go further into detail about the origins of shadow bee shrimp (commonly known as Taiwan bee) phenotypes. In my opinion it has been proven that their ancestry is very similar to that of tigerbees.

The phenotype „snow white/golden bee“ crops up strikingly frequently in a tigerbee line.

Thus it is quite probable that the first genetic mix came with a golden bee, which has lead to the first „mutant“, a shadow bee.

aka midnight prince  or „extrem king kong“ and what both is vey similar to phenotype of black tiger orange eyes. Keep in mind:  without OE-phenotype  tiger shrimps  are able to show white pigments, with OE they never do but they alway have full colored bodies.

The first breeders from Taiwan very probably reproduced these new color forms by consequently backcrossing them with CRS, which has finally led to stable shadow traits AND, at the same time, to the classical phenotypes and red variants. What a great performance!  In analogical to black/ blue tiger OE, this shrimp bodies are full colored with brillant blue/black  and this trait will inherite in a recessive way. They didn’t show OE so they can show a brillant white color, too.

In the near future I am going to publish a table with characteristics that may help explaining „shadow traits“ a bit further, why the colors are more brillant than on other kind of Caridina shrimp and so on because there are some more heteroses effects  by hybridization in a Taiwan bee.

In my breeding lines, I’ve also found shrimp from time to time that looked very much like Taiwan bees, mostly of the „full“ variant, although I’ve never crossed in any shadow shrimp till 2014.

In my breeding groups, the traits generally known as „shadow traits“ have proven to be passed down not simply recessively but additively.

I assume the reason for this is that I’ve backcrossed largely with tiger shrimp without OE ( f.e. midnight prince) so I get more tiger genes based Tibees without OE. The heredity is thus different. 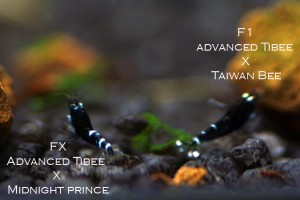 Continue with  Shadow shrimp – in a nutshell – part 2