As I realized that ’shadow‘ is a trait inherited through genes of tiger shrimp, I have introduced some shadow bee shrimp into my advanced breeding project with Tibees in 2014 . Especially german breed of red shadow mosura capped and  spotted head pinto phenotypes. 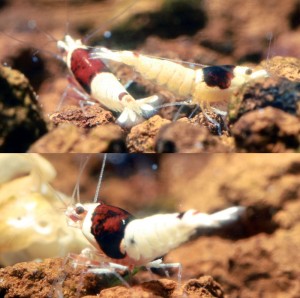 In my small shrimp population the selective pressure had grown very strong, and thus I needed to bring in some fresh blood in order to keep my shrimp vital and healthy.

And indeed, some  phenotypes known as pinto, multistripe, etc. cropped up as early as in the F1 of tigerbee x shadow bee, and the shadow tiger traits were further enhanced. For me, this is just another piece of evidence that there are common ancestors. 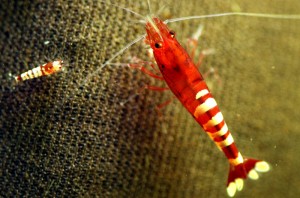 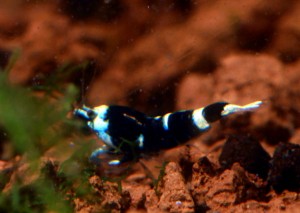 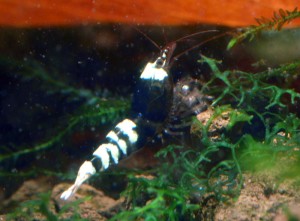 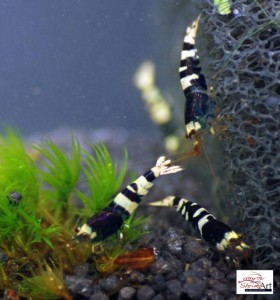 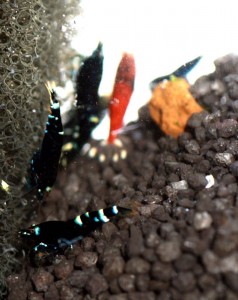 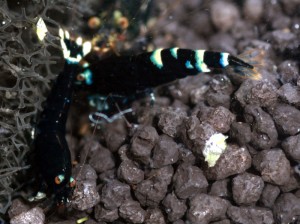 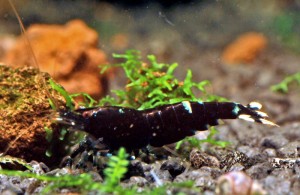 However, in these crossbreeds there were also quite a few unwanted traits that had a negative effect on the quality I was aiming for. Crossing, or rather, backcrossing with pintos and shadow bees has thus posed another interesting challenge to promote the positive traits and to repress the negative ones, and to create new beauties with unique patterns. Shadow Tibees!

Lots of years of work for lots of breeders in all the world!

Please don’t be confused about all the different names for similar looking shadow shrimps like Galayx, Fishbone, Nanacy and so on. Those are all shadow Tibees at  first.  And then they got a individual name for the breeders line and or the pattern thereof.

So the correct name  in future of those shrimp may be:

To be continued with F2 and further generations