May we introduce to you? Shrimp Art hired a new staff member!
This is Mailo the perch and he is full responsible for all culls now!
He works fine, he is a really good hunter and he helped very well to keep the quality of lines high as possible. 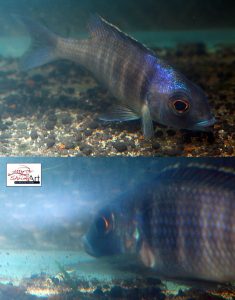 *Add: I posted this in 3 Facebook groups to sensibilize the growing szene for the problems of „selling culls“ especially of hybrids. I got some questions fom ppl and I want show my answers here too, because an origin post seems removed by group-admin.

„Mostly those are males with poor color and pattern. Then shrimps of newer crosses which traits or results are unwanted and of course no shrimp with defects should be introduced again into breeding cycle. Also there are several phenotypes and visible characteristics I don’t consider worthy to breed high quality pattern and colors with.“

„It’s really hard to sit back and see how the things going worse in the last years. Tons of bad genes from “crossbreeding” are spread around and there is only one reason to do so. An that calls fast money.

New breeders don’t realize that they never will be able to breed any nice from hybrids in more than 98% of all cases. Especially former breeder let culls mix several generation without aim/ selecting and most worse if it is more than 3 different kind of shrimps involved. There is almost zero chance to control the developing or stable phenotypes.

Selling those culls or hybrids to newbies who don’t know what they do is like cheating and feeding a false dream. It leads into a downward spiral for this wonderful hobby with producing a lot of gene trash and disappointment when the buyer aware after some time. “

7 Kommentare zu “What is with unwanted shrimps? Especially hybrids and low grades”